In 2016, the Arctic Council celebrated a full round 20 years of its existence, and in 2017 Finland is chairing the Arctic Council, which is why the theme this year was nothing less than the Arctic. I was acting as Finland in the simulation of the United Nations Environment Assembly (UNEA), an organisation which is a result of the call made by world leaders at the United Nations Conference on Sustainable Development, held in Brazil in June 2012, to strengthen and upgrade United Nations Environment Programme (UNEP) as the leading global environmental authority that sets the global environmental agenda and by establishing universal membership in its Governing Council. As the new governing body of UNEP, the UNEA has the mandate to take strategic decisions, provide political guidance in the work of the UNEP and promote a strong science-policy interface. Topics under the conference were 1. Minority rights and Arctic environmental protection, and 2. Sustainable tourism in the Arctic. I had to debate the topics from the point of view of Finland, therefore it involved lots of research beforehand. 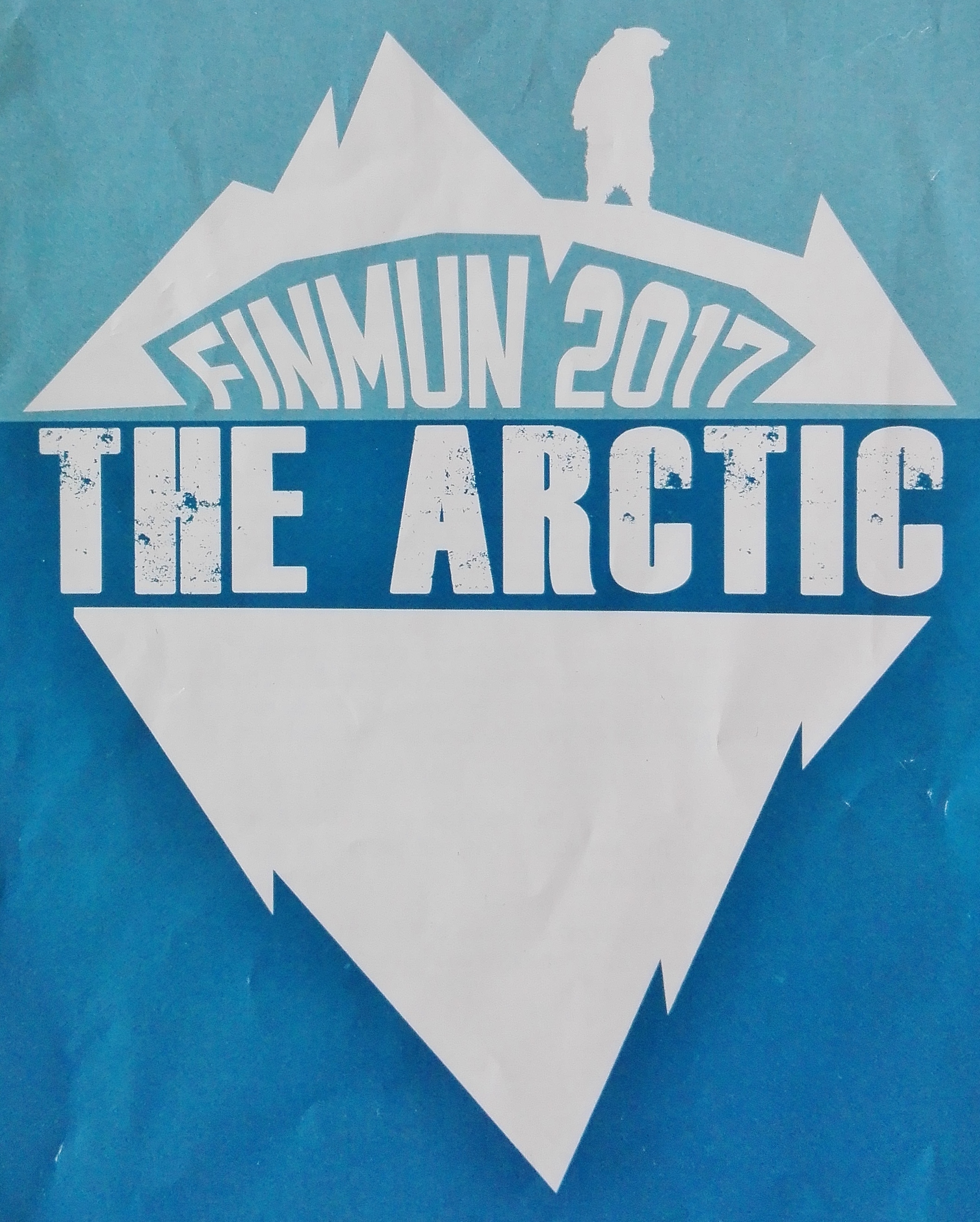 After registering, we attended the opening ceremony at the Helsinki Europe Hall. Keynote speakers included Finn Tarp, Director of the United Nations University World Institute for Development Economics Research; Francis Uy, Deputy Head for the Consulate and Senior Trade Commissioner of the Embassy of Canada to Finland; Ilmi Salminen, UN Youth Delegate of Finland 2017; and Marja Helander, a Sami-Finnish photographer. The opening ceremony was followed by a reception at the Helsinki City Hall to learn more about the local history and culture with food and drinks. We were welcomed by Ritva Viljanen, Deputy Mayor of Helsinki in charge of Educational and Cultural affairs, among others.

On Thursday, the simulations started at the University of Helsinki Students’ Union’s historical premises. After the first two sessions, we visited the US embassy. Some of the speakers at the embassy said that doing the model UN in the past had helped them to get their jobs. In the evening, we went to a rooftop sauna. On Friday, we had the third session, then had lunch and a visit to the Ministry of the Environment before the fourth session. I used the opportunity to ask about the fishing agreement for the Deatnu (Teno) river, the biggest Atlantic salmon river in Europe, which was approved in the Finnish parliament 22nd March 2017, making it illegal for the Sami who don’t live permanently in the river valley to fish there. Regulations would cut the majority of traditional Sami fishing rights, while redistributing new fishing rights to non-indigenous cabin owners in the area. The Finnish government claim that the Sami are lacking in knowledge of the river and the salmon in it, and that they are trying to protect the salmon, namely 30 genetically distinct salmon populations in the river. The Ministry of the Environment responded by saying that this is currently a hot topic, but not something that should be addressed by this ministry. They did not specify which to which other ministry I should address this question instead, but I assume it might be the Ministry of Education and Culture. In the evening, we had a tapas dinner.

On Saturday, we had the fifth and sixth sessions, and finally managed to pass ‘resolutions’ for both the first and second topics. In the evening, I attended a Sitsit party, which is where many people gather for a three-course meal and alcohol. The guests are given a list of rules and a booklet with songs that will be sung during the event. After a song is sung, glasses are raised for a toast. The event is guided by a toastmaster, who keeps note of and introduces everyone who wants to perform something, ensures that everyone abides by the rules, and punishes anyone who doesn’t in a humorous way. Afterwards I then headed back to Tampere on the last train.

As someone who fears public speaking, this event was very challenging for me. However, I think it is important to challenge myself by doing things that scare me, and I feel that the event went well. I spoke up several times, and through this I improved my public speaking and debating skills, and learnt by making mistakes. Sometimes I forgot that I was representing Finland, and at some points I realised that I was presenting my own perspective on the issue rather than that of Finland. However, some people gave me some good feedback about my speeches. I feel a lot more confident after being there, and more knowledgeable about how the UN works. I’m really glad that I went. 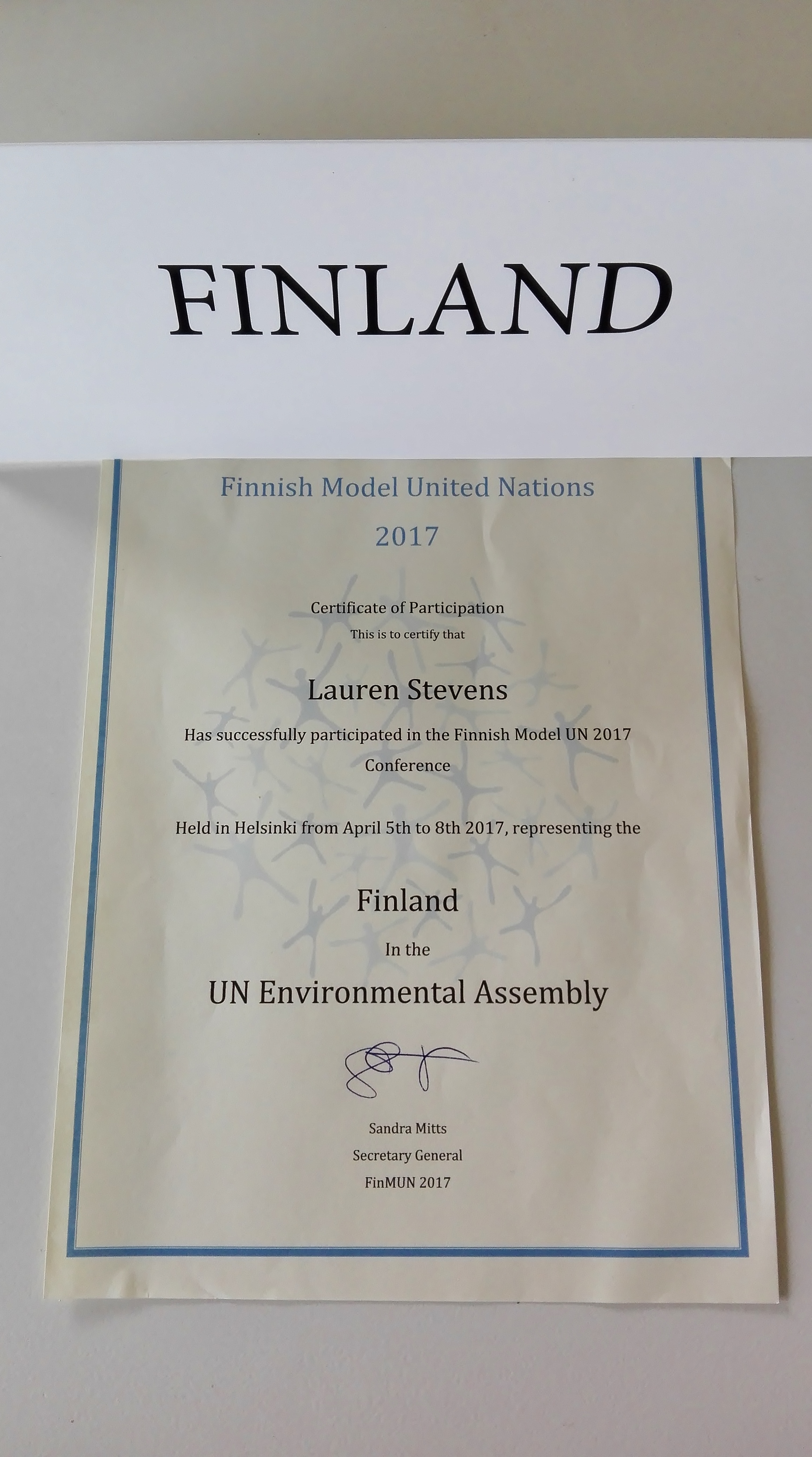 Upon arrival, I chatted to and met some new people, and then we went on a city centre tour arranged by the organisers. We had a tour around the town hall, and saw the Austrian Parliament Building, the ‘Volksgarten’ garden, the official residence of the Chancellor (Prime Minister) of Austria, the Austrian National Library, and Café Central, among other buildings in the Museums Quartier. After going back to the hotel to change into our formal wear, we went to the opening ceremony at the House of the EU, which included a panel discussion and mock debate. On Friday, we were up early to debate the Natural Gas Transmission Regulation, and then later had a press conference. We had to propose amendments and gain support for them by negotiating with other parties who we thought would share some of our views. We then voted on them, and they went to the Council. The Council rejected most of the amendments because they were against European law, which I think most of us had limited knowledge of. In the evening, we had dinner at an original underground cavern Austrian restaurant called ‘Stadtheuriger’. On Saturday, we debated the Anti-Tax Avoidance Directive and then had another press conference, and in the evening, we had dinner at a pizzeria. Afterwards we went to a bar called Kramladen and saw a performance by a band called ‘Balkan Tango Vibes’. I enjoyed it, even though it wasn’t the type of music that I would normally listen to. On Sunday, we had the last session and voting, and then the closing ceremony in which we all received certificates.

I had arranged to stay a few extra days alone because I hadn’t had much time to do some sightseeing during the event. On Sunday evening, I went to a play that my new Syrian friend who I met during the MEU invited me to called ‘Badluck Aleppo’. It was interesting, but wasn’t a play exactly, it was people who’d lived in Syria sharing their experiences in German, English and Arabic (with a translator for Arabic!). I guess we don’t hear about these individual stories that often and it’s probably hard for people to share their traumatic experiences. I know some things that go on there but it was shocking and emotional to hear it from somebody directly. I’m very grateful to be European and have the freedom of movement. Afterwards he then gave me an evening tour of the city.

On Monday, my priority was to visit the Vienna International Centre, where the UN offices are located. I managed to join a guided tour in the morning, which was very interesting. We were able to see the International Atomic Agency, some Nobel Peace Prizes, the United Nations Industrial Development Organisation, a space travel exhibition which included a lunar sample (moon rock), and one conference room and the booths where the interpreters sit. I would love to be an interpreter, but I struggle to quickly switch between languages. I had some time to wait before the tour, so I went up the nearby Donauturm tower, which is 252 metres high. After the Vienna International Centre tour, I found a vegan restaurant called ‘Swing Kitchen’ for lunch where I had a vegan schnitzel wrap meal and vegan Sacher torte, a classic Austrian chocolate cake layered with apricot preserves. I then went to see the famous Hundertwasserhaus, which is an apartment house and expressionist landmark of Vienna.

On Tuesday, I went to Bratislava, the Slovakian capital. I had found out from my Slovakian friends that Bratislava is only an hour away by train and the return ticket costs €16, so I decided to take the opportunity to go there. I appreciate the Schengen Area (an area comprising 26 European states that have officially abolished passport and any other type of border control at their mutual borders) because I didn’t have to show my passport and it didn’t really feel like I was crossing a border (which actually follows a river in this case). I’ve enjoyed the same privilege when travelling from Finland to Estonia. It’s a shame that Britain isn’t part of this area. It would make going to France much easier, for example.

Firstly, I went to the old town, where I saw the Primatial Palace, the old town hall, the main square, Michael’s Gate (the only city gate that has been preserved of the medieval fortifications and ranks among the oldest town buildings), and St. Martin’s Cathedral. Then I climbed up a hill to Bratislava Castle, where I could see nice panoramic views of the city. After I went back down the hill, I walked through a long park where I saw the US embassy (with lots of security of course) and the Historical building of the Slovak National Theatre. Then I saw the Church of St. Elizabeth, commonly known as the Blue Church. I went back to the old city and had a look around The Bratislava City Museum for a few hours. I went past the Ministry of Culture of the Slovak Republic, 17th November Square (the Velvet/Gentle Revolution was a non-violent transition of power in what was then Czechoslovakia, which took place from November 17 to December 29, 1989), and had a nice evening view of the castle lit up, on my way to see the Presidential Palace. Finally, I went to a pub called ‘Slovak Pub’ that my new Slovakian friend who I met at the MEU recommended to me, where each glass of wine was €1 and pint of cider waa €2. Then I headed back to Vienna by train.

On Wednesday, I went to Schönbrunn palace, and had an audio guide tour inside. The history of the imperial family was very interesting. Afterwards I went for a walk in the gardens and climbed up a hill for a nice view of the city. I went past the Volkstheater (People’s Theatre) on the way to a vegan ice cream parlour called ‘Veganista’, which someone I had met during the MEU had recommended to me. I had a scoop of maple pecan and a scoop of ‘Germknödel’ (a traditional Austrian dish, which is a dumpling filled with spiced plum jam) in a cone. Then I continued to a vegan bakery called ‘Nom Nom’ to get a cake and a nut and marzipan muffin for my return journey. I had previously thought that it might be difficult to be vegan in Vienna because I had found it hard as a vegetarian in Germany, but that actually couldn’t be further from the truth. After picking up my luggage from the hotel, I took an evening flight to Helsinki, and I managed to arrive in Tampere early on Thursday morning, because I had a class and a study group meeting the next day.

I found the MUN easier than the MEU because there was only one person representing each country, and there was a lot less people. In the MUN there were around 60 people, and at the MEU there were around 130. In the MUN you must consider your assigned country’s position, but in MEU you must consider your party’s and faction’s positions as well as your country’s, and this can feel confusing in debates.