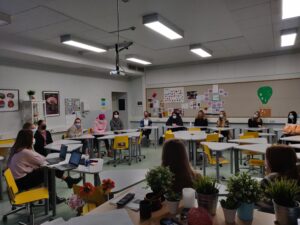 TAYK hosted three school visits in the Classical high school of Tampere. The topics of these visits were the UN and human rights, and bullying on social media. The visits followed the Timeout dialogue method which is a Sitra and Erätaukosäätiö (Timeout Foundation) coordinated initiative. Tiina, one of TAYK’s Events coordinators in 2020, wrote about her experience in organizing these visits in this special year with special restrictions.

During autumn 2020, TAYK was co-operating with the Classical high school of Tampere, as TAYK visited there three times and had Timeout dialogues with the students. The classes we visited were first-year student psychology class, second-year student ethics class, and second-and third-year student social psychology class. Two of the classes were held in Finnish, and one of them was held using both English and Finnish. Combining two languages was a great option to include international members of TAYK for this event with high school students who were not too confident with English yet. The teachers were very open to having a different kind of class experience by practicing dialogue and having a conversation that follows the rules of a Timeout dialogue. But what is this method all about?

The timeout dialogue method was created in a project by Sitra during the years 2016-2019. After the project, the own foundation of Timeout dialogue was established to carry on this procedure. Timeout-foundation continues and develops the work Sitra has done and brings together organizations that work with dialogues in order to spread out the know-how of dialogue as widely as possible. The goal is to make Finland the best-discussing nation in the world and to prevent confrontation, to build bridges between different views, so to say. At the core of this method is to learn how to listen carefully, to respect other people, and to understand the experiences and perspectives of each other. The timeout method has different steps and the structure of the conversation follows these same steps every time. You can find more detailed information about this method from here: Timeout – Let’s become the best in constructive dialogue!

Two of our conversations handled bullying on social media, and one of the conversations was focused on the UN and what the UN is all about. The conversations with students were very fruitful and educational, not only for the students but for us presenting TAYK as well. It was very valuable to talk with the students about these important subjects and to learn what are the thoughts of youth regarding the topic of the dialogue. Especially conversations regarding bullying and bullying on social media were very topical, and many of the students told, that this was the first time they had a proper discussion about this topic – even if it would have been great to focus for this important subject on the earlier grades as well.

One thing that stuck on my mind personally was, that bullying on social media has become such a new normal, that it might not even be recognized as bullying, it´s just something that belongs in social media. We also focused on the feeling of being left out and being lonely, and that due to the situation within COVID-19 restrictions has affected the social relations as everyone can’t be included anymore because of assembly restrictions.

As a result of these conversations the students, TAYK members, and the teacher had important realizations about how we can develop our activities to be all-inclusive and to create a safe atmosphere around us.

Every dialogue we had was an important one, but sometimes the students were a bit more talkative than other times. The challenge of the dialogue then was to keep the conversation going even if the students were not willing to talk that much. We noticed, that in moments like these, it helped that we shared a few of our own experiences regarding the topic – for example, shared our experiences of feeling left out or not being a part of a group.

As bullying and the feeling of being left out might be considered as a phenomenon among kids and youth, it’s important to understand that these feelings can also be present in higher-level education as well as a working life environment. That’s why we felt important to state, that talking about these feelings is one of the key elements in preventing those experiences which can be received through life.

It might be hard to admit that I feel left out from the group, or I don’t feel I belong, but as we have noticed, when someone has the bravery to open their mouth it might lead to many confessions about having similar feelings. None of us is perfect, and we are building ourselves every day. Having a dialogue about difficult feelings might teach us how our acts make another person feel, and what are those things that we can personally focus on to make sure everyone feels welcomed. It’s not easy to admit that one might have had been a bully or to recognize unfavorable ways of acting within oneself, but recognizing those maybe unpleasant but unconscious ways of treating people is the first step for the change.

During the dialogue, we were able to share both feelings of being left out and confessions of being a bully or a side viewer, and following the idea of the Timeout dialogue, no-one was judged, no-one was ashamed – we accomplished our goal to share our feelings and perspectives openly and learned from each other’s experiences.

Regarding the experiences of this fall, I would highly suggest that TAYK continues organizing Timeout dialogues during school visits. The dialogues are quite easy to organize, and they create an extraordinary environment where all the people participating can learn things that broaden their perspective and give ideas to consider for a long time.

Tiina Helin – “Before forming your opinion of the opposition, listen carefully to what she or he has to say´´