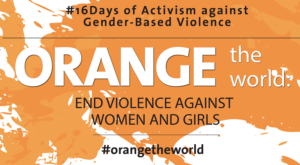 The world is orange, starting today.

Violence manifests itself in countless forms, and its spectrum is regrettably multi-faceted. When it comes to open discussion, media and the news, the opposing ends of the spectrum seem to be very far from one another: on one hand, there is graphic, startling, brutal violence openly discussed in striking headlines; on the other hand, there is the invisible end of the spectrum, incidents, that remain unknown to all except for the victim and the offender. Whether these invisible forms of violence take place at school, work or home, they often have two things in common: Firstly, strikingly many of the incidents are never reported. Secondly, more often than not the victims are women and girls.

One of the severest human rights violations UN Women seeks to defeat is violence against women. According to WHO, one in three women and girls face some kind of violence either in an intimate relationship or by being sexually assaulted by someone else1. The different forms of violence include for instance child marriage, sexual abuse, human trafficking, harassment either in person or anonymously online and physical or psychological abuse. The last three in particular are grave problems also in the relatively safe Nordic countries. In Finland, too, the numbers are alarming: 71 per cent of women living in Finland have experienced sexual harassment after turning fifteen. The percentage of victims of online harassment, then again, is 14.2 The numbers very clearly show that there is plenty of work to do all over the world and that the rights of women and girls deserve attention also in countries that are seemingly gender equal. It cannot be denied that progress has been made both in legislation and in general atmosphere and attitudes; this shows that change is indeed possible but takes effort and dedication. Despite the many achievements, the invisible, unreported violence continues to be a dire problem here in Finland as well as in other countries. Progress can be made only after the problems are no longer underestimated and buried.

The many problems and the great danger of invisible, unspoken violence must finally be acknowledged: the fact that the violations remain hidden does not mean that they do not occur. Any place, regardless of its good reputation and allegedly stable atmosphere, can be a scene of abuse and harassment. In most cases of gender-based violence this place is, sadly, home: women are often abused or mistreated by their partners or family members. For many women home has become truly unsafe, which is often unnoticed by friends, neighbours and relatives; the saddest and most extreme incidents result in death, for approximately 58 per cent of female murder victims are killed by a partner or a family member3. Domestic violence is still largely unreported because of completely unnecessary and undeserved shame and stigma. Therefore it is also one of the hardest problems to conquer.

Today, the 25th of November, marks the International Day for the Elimination of Violence against Women. This year’s theme is “Orange the World: Generation Equality Stands against Rape”. UN Women strives for equality in over 90 countries all over the world, resiliently aiming to create a safer, more inclusive and just planet. Of the seventeen Sustainable Development Goals established by the UN in 2015 it is Goal 5, Gender equality, that is found at the core of each and every project UN Women works for. However, as in all cases, the seventeen goals intersect, and their mutual influence cannot be ignored. For as long as inequality thrives, whether in the form of physical abuse, child marriage or harassment, for instance, the other sixteen goals are held back.

Idleness and ignorance do not avail, but neither does hopelessness. Take a stand, wear orange, speak up and engage in conversations; invite people to participate at work or at school; open discussions in social media. Our local committee group in Tampere is going to join the discussion on social media and spread the orange word, and we would love to hear your thoughts and ideas. Orange days occur between 25th November and 10th December, the latter marking the International Human Rights Day. However, the two weeks only matter if the idea holds strong for the remaining fifty weeks of the year, too. 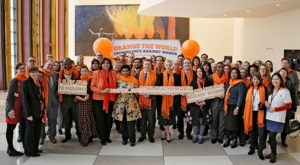