As most of you have probably noticed, we have a new, fancy looking webpage! Kudos Miska for working on it during the autumn 2018. As part of our master plan we’re going to revive also our blog. As the very first blog post, we felt it would be nice to talk about TAYK and our current goals and themes so you readers would be able to catch up nicely 🙂

As I’m writing this, we’re waiting for our newbies night to start and I’ve been preparing to talk about these same topics there also. What is TAYK? Why should you join us and be part of our events? And what on earth are Agenda 2030, SDG’s and 2250? To start off, let’s talk a bit about TAYK itself. We are now a 15-year-old association with deep connections to our predecessor MYKY ry (Mansen YK-yhdistys) that was put down somewhere during the mid-90’s. The reasons were, according to its last chair, the fading interest in the UN and its values with the recent ending of Cold War and the fall of Berlin Wall. In addition, Finland was suffering from the recession and without resources or people willing to join MYKY’s events, there was no need for an association like that. In 2004 however, the successor known as TAYK was founded.

The association have grown a lot during these last 15 years. It started with just a couple of people and really small budget and low effort events. Now we’re organizing events for our ~150 members; events being anywhere between grabbing a drink (‘’Have a drink with TAYK’’) to visiting other countries like we did last autumn when visiting Geneva! But this isn’t a reason to stop doing more and going even bigger. I feel it’s incredibly important to share knowledge about the UN and its values now that the international politics have gone remotely downhill with growing protectionism and isolation together with talks about a probable new Cold War. There are huge humanitarian crisis around the world, which the world cannot seem to find any definite answers. These problems aren’t something any of the countries or their citizens could solve alone, so the need for international cooperation and global awareness is more important than ever.

As part of these issues, we in TAYK hope to make people more aware of the issues at hand and make sure people don’t fall to apathy with everything they hear from the news. Thus, our current themes are the Agenda 2030 and the security council’s resolution 2250 ‘’Youth, peace and security’’. 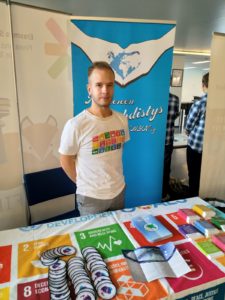 ‘’The numbers Mason, what do they mean?’’

Yeah, we hear this a lot. It’s not like most of us follow closely UNSC (United Nations Security Council) resolutions or other UN stuff. We’re probably going to add sections to our webpage about Agenda 2030 and 2250 soon(ish), but before that happens, I’ll try to open them bit in this post.

From these two number combinations, the Agenda 2030 is most likely more well known since it is the biggest thing the UN is trying to implement worldwide currently. Agenda 2030 or the SDG’s (Sustainable Development Goals) are 17 interconnected goals, which are meant to be achieved by 2030. These 17 goals are meant to be a reference to global development in different sections of societies and global dimensions; for example, goal number 1 is ‘’No poverty’’, goal number 13 is ‘’Climate Action’’ and goal number 17 is ‘’Partnership for the goals’’.

The SDG’s are a successor for the Millennium Development Goals spanning from 2000 till 2015, which were nearly achieved. For example, the number of people living on less than $1.25 (extreme poverty) a day has been reduced from 1.9 billion in 1990 to 836 million in 2015 – the goal was to halve the number. Also the global maternal mortality ratio fell by nearly half – short of the two-thirds reduction the MDGs aimed for.

The MDG’s were ambitious, but the SDG’s aim even higher. For example, Goal 1 ‘’No Poverty’’ includes the eradication of extreme poverty, meaning there would be no more people living with less than $1.25 a day. The progress is calculated, evaluated and followed with Sustainable Development Indexes, which you can look up yourself from a link I’ll provide in the end of this post. Finland has been one the first to take action on government level to acknowledge the goals as part of the state’s strategy. Just couple of days ago the state published their website for Finland’s SDI’s.

Whether or not we’ll achieve these goals or not, is up to every single person living and breathing on this planet. It is not just the governments, corporations and organizations but also you, me, your family and your friends who are responsible in trying to make our way of living sustainably on this planet.

Less known, but even so important. UNSC Resolution 2250 is better known as the resolution for ‘’Youth, peace and security’’ and it was unanimously adopted in 2015. The aim of this resolution is to call for the ‘’participation and views of youth to be considered during the negotiation and implementation of peace agreements, as their marginalization would be detrimental to building sustainable peace in such aspects as repatriation, resettlement and reconstruction’’. The resolution defined youth as persons between 18 and 29.

2250 was chosen as the annual theme by the UN Youth of Finland and TAYK, as we felt it would be a good year to participate the youth of Finland in the political processes here in Finland. In 2016 a 2250 network was founded for civil society, to take action together to make it easier to advance the resolutions aims together. As we’re currently having two elections, national parliamentary and European Parliamentary, it is necessary to get the youth of Finland involved and heard. There has never been more young people in the world and all of us will be the ones making the difference in the future. But that doesn’t mean we shouldn’t make the difference right here, right now.

I could’ve written a whole lot more about these topics, but I hope this will improve your understanding even a little bit. If you’re interested in hearing and learning more about these topics or about TAYK, feel free to contact me or anyone from the current board of TAYK. You can also come to talk to us in our events whenever you like!

I tried to gather some interesting links here about 2030 and 2250, so can read more about them.

The writer is the chair of TAYK, an enthusiastic association nerd, student of international relations and currently in a hurry to the newbie’s night.